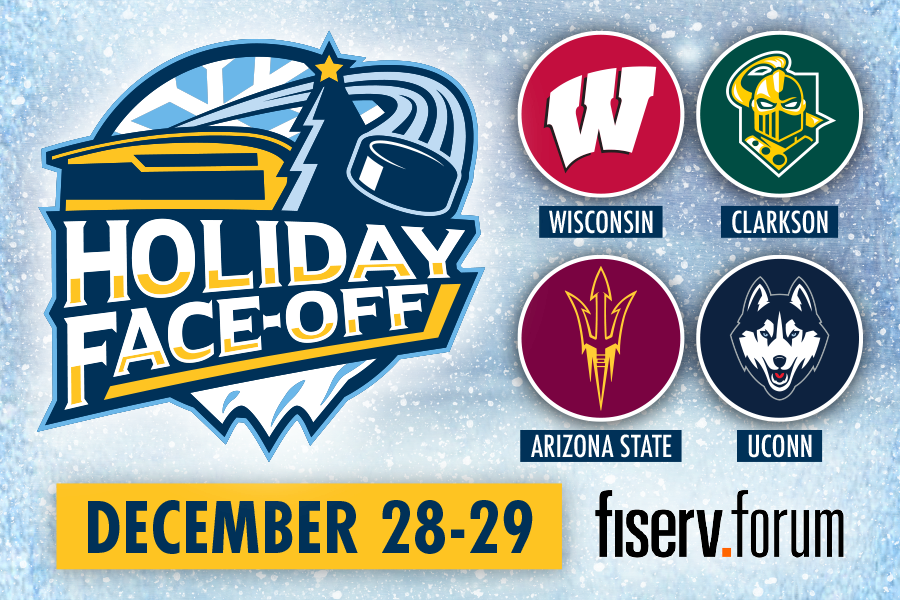 MILWAUKEE, Wis. - The Gazelle Group is pleased to announce that the inaugural Holiday Face-Off college hockey tournament will be held at Fiserv Forum, home of the NBA’s Milwaukee Bucks.

The field for the event, which will be played from December 28-29, 2020, consists of Wisconsin, No. 7/8 Clarkson, No. 13/13 Arizona State, and UConn. Semifinal play will take place on Monday, December 28 with the Championship game and third-place game on Tuesday, December 29. Matchups will be announced at a later date.

"We are excited to begin what we believe will be the top national men’s college ice hockey tournament in the country," says Rick Giles, president of the Gazelle Group. "For us to be able to attract four of the most distinguished programs in the nation shows that these programs want to compete against the very best and we plan on continuing to bring together the best teams in college hockey to play at one of the finest venues in the country, Fiserv Forum."

College hockey in Milwaukee has a rich history. The city has hosted the NCAA men’s Frozen Four on three occasions - 1993, 1997, and 2006. In 2006, Wisconsin won its most recent National Championship on the Bradley Center ice.

In addition, from 1989-2003, Wisconsin hosted the Badger Hockey Showdown at the Bradley Center, averaging over 26,000 fans a year during that span.

Arizona State (Head Coach: Greg Powers, Independent)
In just its fifth season as a Division I program, Arizona State has emerged as a national contender under the guidance of head coach Greg Powers, a finalist for National Coach of the Year honors a year ago when ASU became the fastest start-up program to earn a spot in the NCAA Tournament...the Sun Devils won their school-record 22nd game of the season on February 15 and are ranked No. 13/No. 13 (USCHO/USA Today, USA Hockey Magazine) in the national polls...three of the top four ASU scorers are expected back next season - James Sanchez, Johnny Walker, and Josh Maniscalco - as well as starting keeper Evan DeBrouwer...a year ago the Sun Devils posted 21 wins.

UConn (Head Coach: Mike Cavanaugh, Hockey East)
Mike Cavanaugh has been the head coach at UConn for seven seasons, guiding the Huskies through their transition to Hockey East...UConn finished the regular season with 26 points in the Hockey East standings, its highest point total since joining the league...featuring one of the youngest rosters in the country, of UConn’s top 13 scorers, nine are either freshmen or sophomores, led by freshman Vladislav Firstov, who ranks among the top rookies nationally in scoring and the top 10 nationally in freshman goal scoring...classmate Yan Kuznetsov joins his fellow Russian countryman among that group, as do sophomores Ruslan Ishakov, Jachym Kondelik, Carter Turnbull, Jonny Evans, Kale Howarth, and Marc Gatcomb...in the Huskies' net is sophomore Tomas Vomacka.

Wisconsin head coach Tony Granato:
"Wisconsin hockey has great history in Milwaukee from the Badger Hockey Showdown and the NCAA championships at the Bradley Center. It's been 15 years since we played in the city, so we are extremely excited to return.

"When we were approached to play in the tournament, it was an easy decision. Fiserv Forum is a beautiful building and Milwaukee is a great hockey town so we feel lucky. We’re really looking forward to a great experience for our student-athletes and fans."

Clarkson head coach Casey Jones:
"We are really excited about going into that facility. We've heard nothing but great things about Fiserv Forum. The field that will be there is outstanding. It is an opportunity to play some tremendous non-conference games against Wisconsin, Arizona State, and Connecticut. Our guys love having the chance to compete for tournament championships during the regular season and it gives us the opportunity to get an assimilated postseason setup. There are a lot of things we can look forward to at the Holiday Face-Off. We are ecstatic to be heading out to Milwaukee next December."

Arizona State head coach Greg Powers:
"We are very excited to get back to the great State of Wisconsin and play in this event at Fiserv Forum. The field of teams is fantastic and we are honored to be a part of it."

UConn head coach Mike Cavanaugh:
"We're certainly excited to be participating in the inaugural Holiday Face-Off at Fiserv Forum in Milwaukee. With that field - Clarkson, Arizona State, Wisconsin - it's as competitive a field as I've seen in a Christmas tournament. We"re really excited and looking forward to the Holiday Face-Off next December."

About Fiserv Forum
Fiserv Forum is a preeminent sports and entertainment arena in downtown Milwaukee that opened on Aug. 26, 2018. Designed by Populous, Eppstein Uhen Architects and HNTB, the venue offers incomparable sightlines, customer service, technology and amenities. Fiserv Forum includes 17,385 seats for basketball, 15,178 for hockey, and up to 18,000 for concerts, with 34 luxury suites and three clubs. The new venue hosts a diverse variety of events, including the Milwaukee Bucks, Marquette University men's basketball, major concerts, family shows and other sports and entertainment events, and has been selected to host the 2020 Democratic National Convention. More upcoming events in 2020 include the American Cup, Michael Buble, Blake Shelton and Tame Impala. In addition to Fiserv, Founding Partners for Fiserv Forum include BMO Harris Bank, Froedtert & the Medical College of Wisconsin, Johnson Controls and Miller Brewing Company.