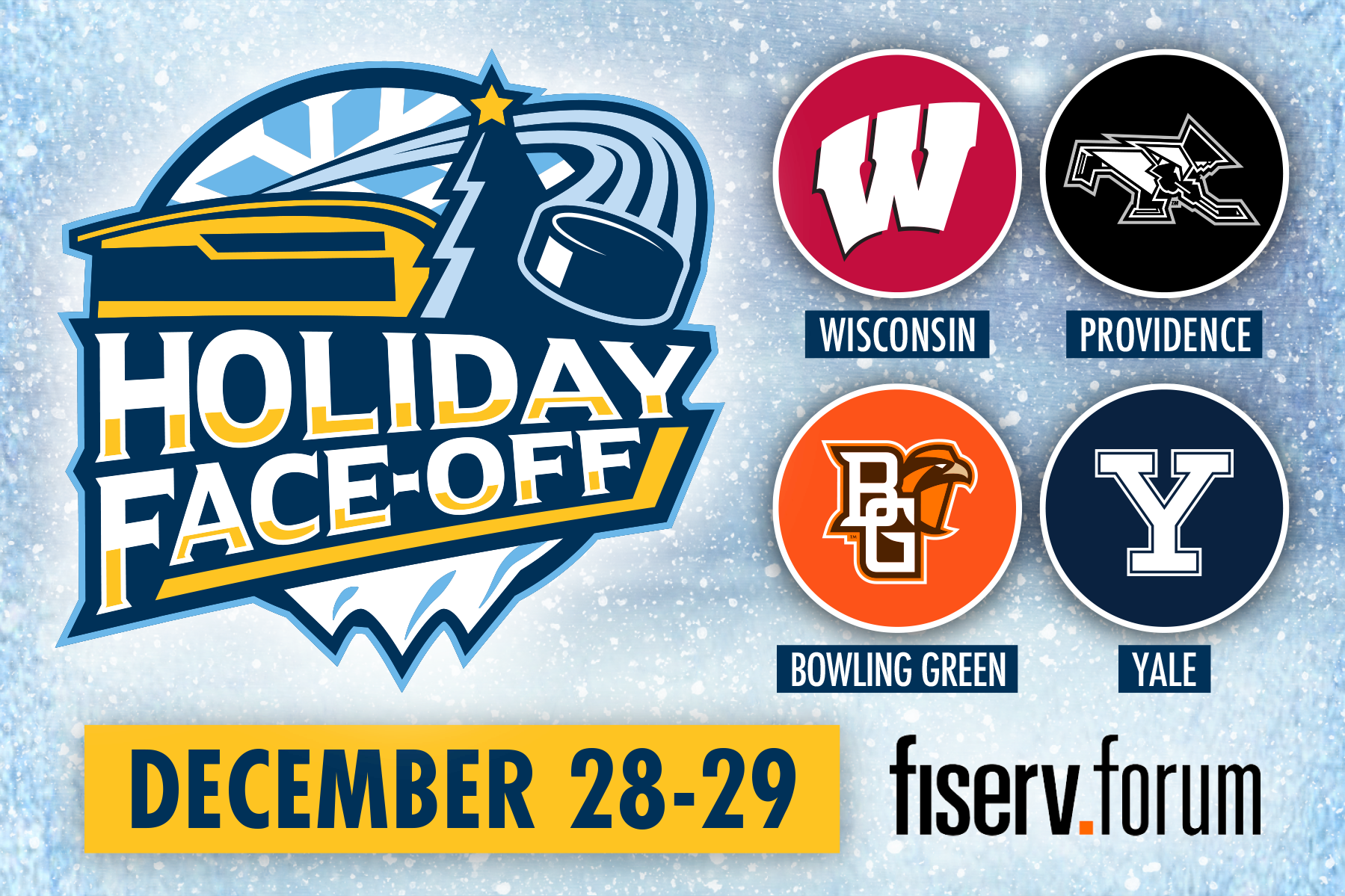 MILWAUKEE, Wis. - The Gazelle Group is pleased to announce that the inaugural Holiday Face-Off college hockey tournament will be held at Fiserv Forum, home of the NBA's Milwaukee Bucks.

The field for the event, which will be played from December 28-29, 2021, consists of Wisconsin, Providence, Bowling Green, and Yale. Semifinal play will take place on Tuesday, December 28 with the Championship game and third-place game on Wednesday, December 29. Matchups and game times will be announced at a later date.

"We are excited to begin what we believe will be the top national men's college ice hockey tournament in the country," says Rick Giles, president of the Gazelle Group. "For us to be able to attract four of the most distinguished programs in the nation shows that these programs want to compete against the very best and we plan on continuing to bring together the best teams in college hockey to play at one of the finest venues in the country, Fiserv Forum."

College hockey in Milwaukee has a rich history. The city has hosted the NCAA men's Frozen Four on three occasions - 1993, 1997, and 2006. In 2006, Wisconsin won its most recent National Championship on the Bradley Center ice.

In addition, from 1989-2003, Wisconsin hosted the Badger Hockey Showdown at the Bradley Center, averaging over 26,000 fans a year during that span.

Wisconsin head coach Tony Granato:
"Wisconsin hockey has great history in Milwaukee from the Badger Hockey Showdown and the NCAA championships at the Bradley Center. It's been 15 years since we played in the city, so we are extremely excited to return."

"When we were approached to play in the tournament, it was an easy decision. Fiserv Forum is a beautiful building and Milwaukee is a great hockey town so we feel lucky. We’re really looking forward to a great experience for our student-athletes and fans."

Providence head coach Nate Leaman:
"Our program is eager to participate in the inaugural Holiday Faceoff in Milwaukee after Christmas. Competing against a field consisting of Wisconsin, Bowling Green and Yale will provide a tremendous challenge and one we are looking forward to."

Bowling Green head coach Ty Eigner:
"We are really looking forward to being a part of a first-class event with some of the best teams in college hockey. Milwaukee is a great city and we have heard nothing but good things about Fiserv Forum."

Yale head coach Keith Allain:
"It’s always fun going to Wisconsin for a tournament because it is such a great hockey state, one that takes great pride in its teams. The great field of teams in this tournament adds to our excitement about playing in Milwaukee. Our goal is to win championships and this is the first one on the list."


About the Gazelle Group
The Holiday Face-Off is produced by the Gazelle Group of Princeton, N.J. The Gazelle Group is a sports marketing firm, specializing in event production and management, client representation, and sponsorship consulting. In addition to the Holiday Face-Off, Gazelle produces numerous nationally-recognized college basketball events, such as the Empire Classic benefiting Wounded Warrior Project, the Legends Classic presented by Old Trapper , the Gotham Classic, the Sunshine Slam, and the College Basketball Invitational. For more information on the Gazelle Group, please visit www.gazellegroup.com.