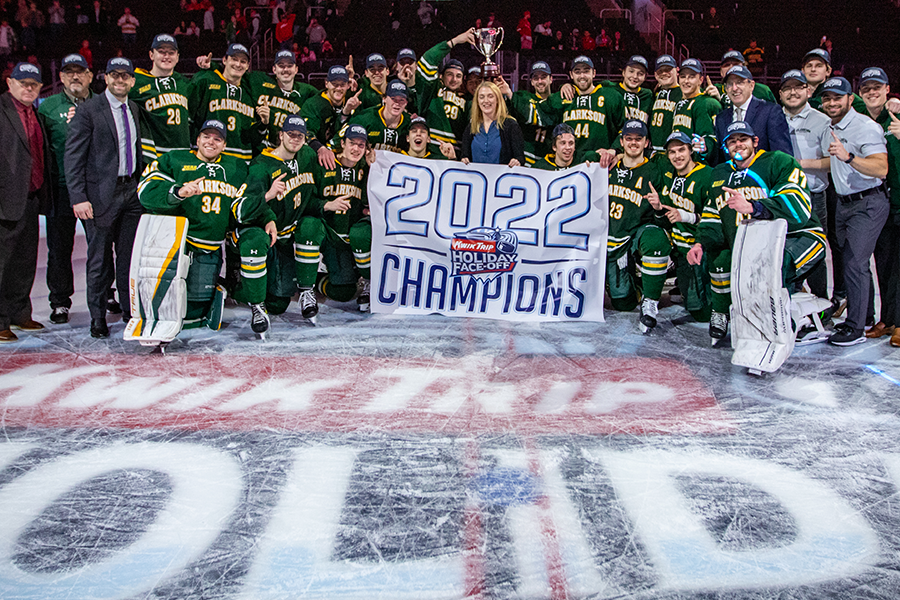 MILWAUKEE, Wis. – Clarkson’s mission was to come to Wisconsin and beat the defending champions in front of a partisan crowd dressed in red. Mission accomplished as the Golden Knights earned the 2022 Kwik Trip Holiday Face-Off with a 3-1 win over Wisconsin at Fiserv Forum.

Chris Klack opened the scoring with an unassisted goal at the 8:35 mark of the first period to give Clarkson the lead heading into intermission. Penalties then began to play a major role as the Knights, on a 5-on-3 power play, extended their lead when Anthony Romano scored his third goal of the tournament at 6:32. Cruz Lucius cut the lead in half at 16:34.

The third period belonged to Ethan Haider as the Clarkson keeper stopped all 10 shots to hold off the Badgers. The game wasn’t cemented until Erik Bargholtz scored on an open net to begin the celebration.

In the consolation game, No. 15 UMass earned a 4-1 victory over Lake Superior State. Aaron Bohlinger potted two goals for the Minutemen while keeper Henry Graham, in his first career start, stopped 31 of 32 shots.