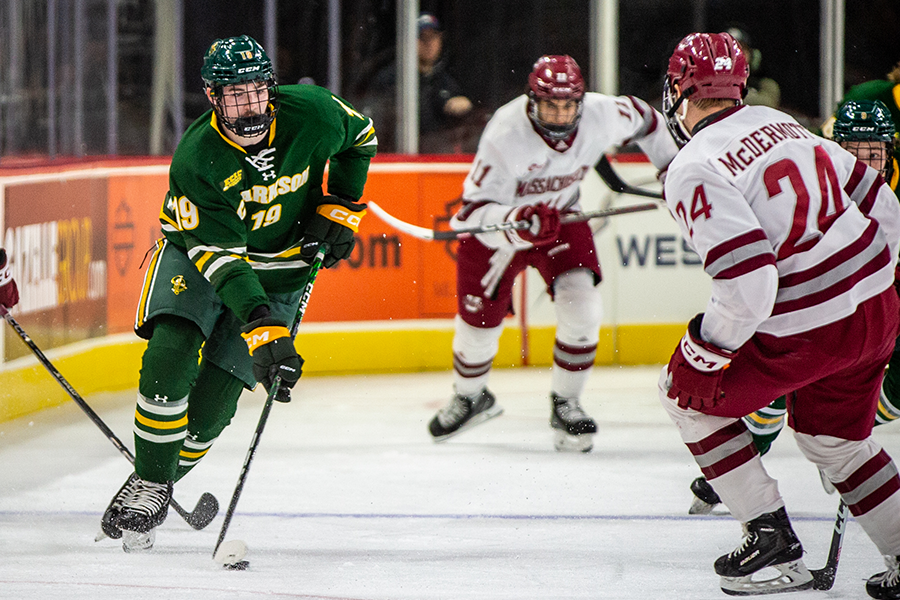 In the first semifinal game, No. 15 UMass jumped out to a 3-0 lead midway through the second period, with two of those goals coming off the stick of Cole O’Hara and the other from Josh Nodler.

At this point, Clarkson took over, scoring the game’s final six goals to take a 6-3 decision. Mathieu Gosselin scored the first and last of those four goals, the first coming at 13:48 of the second period. Ayrton Martino followed with a tally 3:06 later to make it 3-2 after two periods.

In the third, Anthony Romano scored at 10:50 to knot it at 3-all. Gosselin netted his second of the night at 13:22 before Romano made it two third period goals for himself at 16:54. Forty seconds later, Gosselin ended the night’s scoring with his third goal.

Clarkson, who outshot UMass 15-6 in the first period, scored its six goals on 15 shots on goal over the final two stanzas, while keeper Ethan Haider stopped 32 UMass shots.

For the Minutemen, Tyson Dyck and Aaron Bohlinger had a pair of assists. Martino finished with two goals and two assists for the Golden Knights.

It was then Wisconsin and Lake Superior State’s turn to take the ice. After a scoreless first period, Brock Caufield got the scoring started for Wisconsin, 2:36 into the second period to kickstart the Badgers to a 4-0 win and a return to the Kwik Trip Holiday Face-Off championship game.

On the power play, Carson Bantle made it 2-0 less than five minutes later to give Wisconsin a 2-0 lead after two periods. Sam Stange made it 3-0 with 3:33 to play and Liam Malmquist tallied an open net goal to close the scoring.

Mathieu De St. Phalle and Cruz Lucius each had a pair of assists and Jared More stopped all 24 shots he faced.

Wisconsin and Clarkson will square off for the championship at 7:30pm (CT) on Thursday, preceded by the consolation match between UMass and Lake Superior State at 4:00pm (CT) at Fiserv Forum.

Tickets for Thursday’s doubleheader can be purchased at Ticketmaster.com.

Last year, Wisconsin needed extra time to win its two games in the Kwik Trip Holiday Face-Off. The Badgers took their opener when Brock Caufield scored in overtime, giving Wisconsin a 3-2 win over Yale. In the title game against Providence, a shootout was needed to declare a champion and it wasn’t until the sixth round when Zack Urdahl broke a 1-1 shootout tie to give the Badgers the crown.