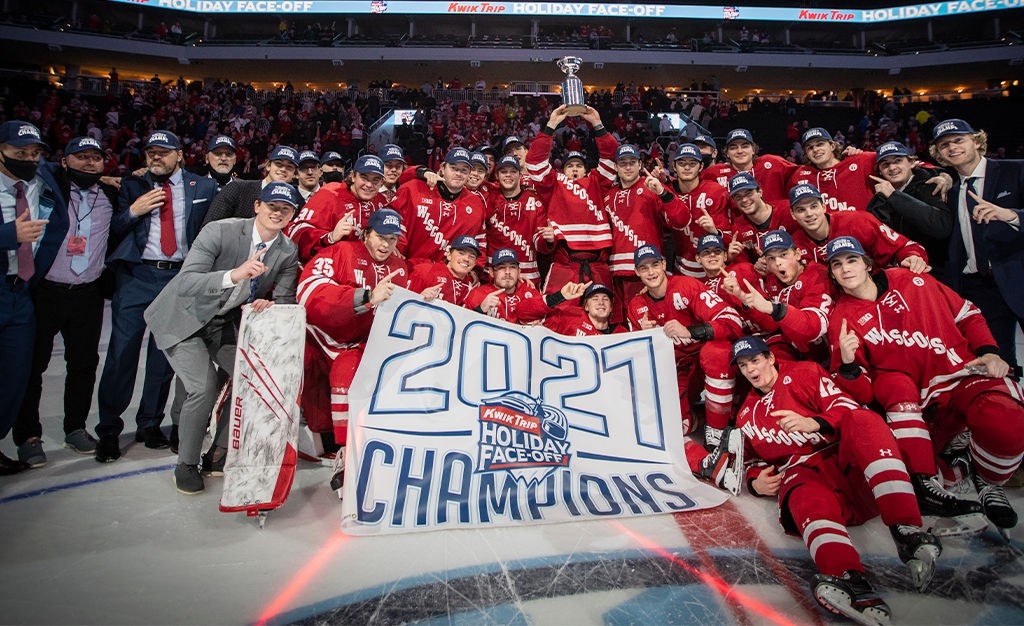 MILWAUKEE – Trailing 2-0 in the third period, Wisconsin roared back, sending the game into overtime where they won in a shootout.The win comes in a city that hosted the Badgers’ last NCAA championship back in 2006.After a scoreless first period, Providence netted two goals in a span of 1:01 in the second period, first by Matt Koopman and then by Alex Esposito.Wisconsin got on the board early in the third period on a Corson Ceulemans goal at 2:05. Matthieu De St. Phalle then tied the score at 2-2 with 4:05 left in regulation.After a scoreless 3-on-3 overtime, the game moved to a shootout. Wisconsin’s Brock Caufield and Parker Ford of Providence both scored in the first round. At that point, the goaltenders took over, each registering four straight saves. In the sixth round, Wisconsin’s Zach Urdahl broke the tie and when Jared More stopped Nick Poisson, the Badgers’ celebration began.De St. Phalle was named the Kwik Trip Holiday Festival Most Outstanding Forward, Ceulemans took the Most Outstanding Defenseman trophy, and Jaxson Stauber of Providence was tabbed the Most Outstanding Goaltender.In the consolation game, Bowling Green jumped out to a 2-0 lead and held on to defeat Yale, 2-1.Nathan Burke opened the scoring at 1:07 of the first period. Adam Pitters then scored on a “Michigan,” driving around the net and scoring on a lacrosse move at 16:16 of the second period.Yale cut the lead in half with Briggs Gammill goal at the 10:11 mark of the third period and controlled much of the play the rest of the game but the Falcons withstood the onslaught.